The goal is to transform agriculture while providing food and other products through the creation of agroecosystems that function at the highest level of biodiversity and ecosystem services – the “epitome of sustainability.”

Multistrata agroforestry systems go by many names – food forests, edible forest gardens, tropical homegardens, and more. What they have in common is their structure – multiple layers of vegetation, typically one or more layers of trees, with further layers of shrubs, vines, herbaceous species, and often fungi and/or livestock.

These “agroforests” can be at a tiny backyard scale or big enough to cover 50-70% of entire islands. Contemporary commercial examples include coffee and cacao under nitrogen-fixing shade trees. Multistrata systems go back 13,000 years in Java, and today are practiced on an estimated 100 million hectares globally (247 million acres), mostly in the humid tropics. Home-scale systems appear quite viable in cold climates, but models of commercial cold-climate hard to find – in deed development of such systems is one of our goals.

Scientists have called tropical homegardens “the epitome of sustainability” and have identified many benefits of these systems:

The very complexity that makes these systems so fantastic makes them hard to study, and greatly slows their spread. Outside of the tropics models are few and far between.

Jonathan Bates and Eric Toensmeier, the creators of Paradise Lot are volunteers on the board of the Apios Institute and we believe this technology will help farmers and communities around the world gain knowledge and implement these systems faster. 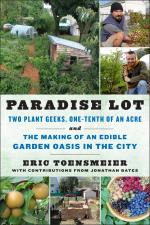